If you don’t see the Sound Levels window on the screen, click the button in the top-right corner of the Main Window to show it.

You can also find the Sound Levels window in the Window menu at the top of the display, or by typing ⌘'.

The Sound Levels Window shows what audio source is in use. Clicking on the name of the source will show you any other available sources. The Mic menu at the top of your display also provides options, including the Mute Microphone option— shift⌘M. 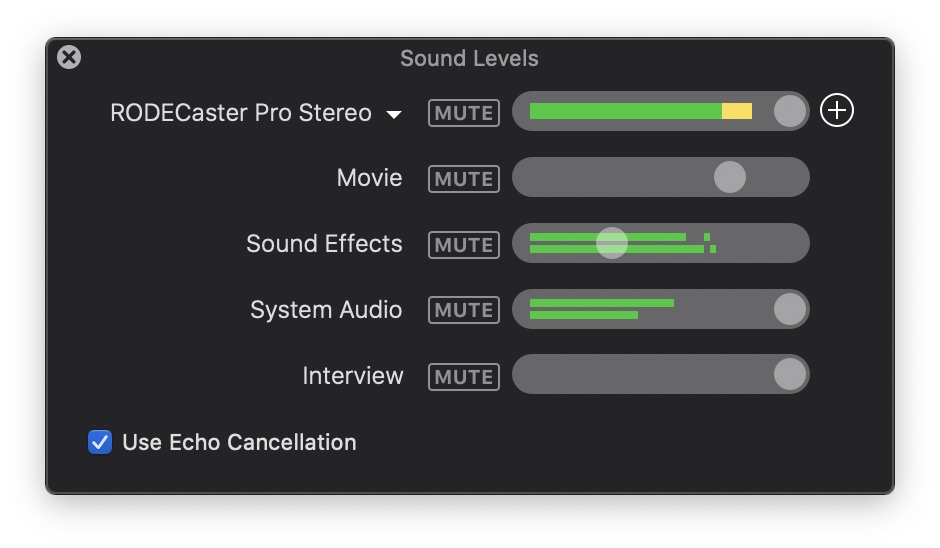 A meter in the Sound Levels Window will show the currently selected source’s volume level. You can adjust this with the slider. When sharing your screen, you’ll also see a sound level adjustment for System Audio.

Each audio channel (microphone, movie audio, Interview mode, Sound Effects and System Audio) can be muted using the Sound Level window’s MUTE buttons. These mute setting will be saved in the Scene. For example, you may have an Interview guest online, but only unmute the guest’s audio in particular Scenes.

To remove the secondary audio input, click the button.

When an iOS device is connected, Ecamm Live will automatically add it as a second audio device. You will also see a checkbox and popup menu to configure audio play-through for the iOS device. This will allow you to hear sound from the iOS device on your Mac’s speakers or a headset.

Note that when Echo Cancellation is enabled, Ecamm Live will only use audio on channel 1 of multi-channel audio input devices, so stereo audio will not be available.

Ecamm Live provides the option for Interview guests to connect in stereo, however the guest must use Chrome on a desktop computer, and audio processing must be disabled.

If you are using your Mac’s speakers during your broadcast, that may cause an echo if your mic picks up speaker audio. To prevent this, Ecamm Live has Echo Cancellation, which you can enable or disable using the checkbox in the Sound Levels window. Echo Cancellation listens for sounds produced by your speakers and removes it from your broadcast. It works remarkably well, most of the time. If your audience is reporting missing sound, try turning off this feature.

When Echo Cancellation is enabled, Ecamm Live will only use audio on channel 1 of multi-channel audio input devices. If your audio interface has more than one channel, be sure to turn off Echo Cancellation.

The Sound Levels window can detect several audio misconfigurations and potential echo and feedback. It will display if a possible problem is detected. Click the warning icon for more information about the problem. Possible issues include:

An Aside on Audio Quality

An old adage about video production is “Viewers will tolerate mediocre video quality if the audio is good, but poor audio is never tolerated.”

Your goal is as much green visible in the audio monitor as possible when you’re speaking, little yellow, and avoid the red. If you’re hitting red regularly, your audio is turned up too high. The sound will distort when you broadcast. Move the slider to the left until you rarely, if ever see red. Go too far left, and your audience will have trouble hearing you.

While Ecamm Live works with the Mac’s internal microphones, we recommend the use of a quality USB microphone or USB audio interface whenever possible.