To start a scheduled broadcast,click the Upcoming button at the bottom of the Main Window, and then click the desired broadcast in the broadcast list.

Once the countdown reaches 120 minutes, (or 15 minutes if a LinkedIn destination is included), the countdown button will turn blue, indicating that early start is available. Click the countdown to start the broadcast before the planned start time.

You are now streaming! The Main Window will look a bit different. 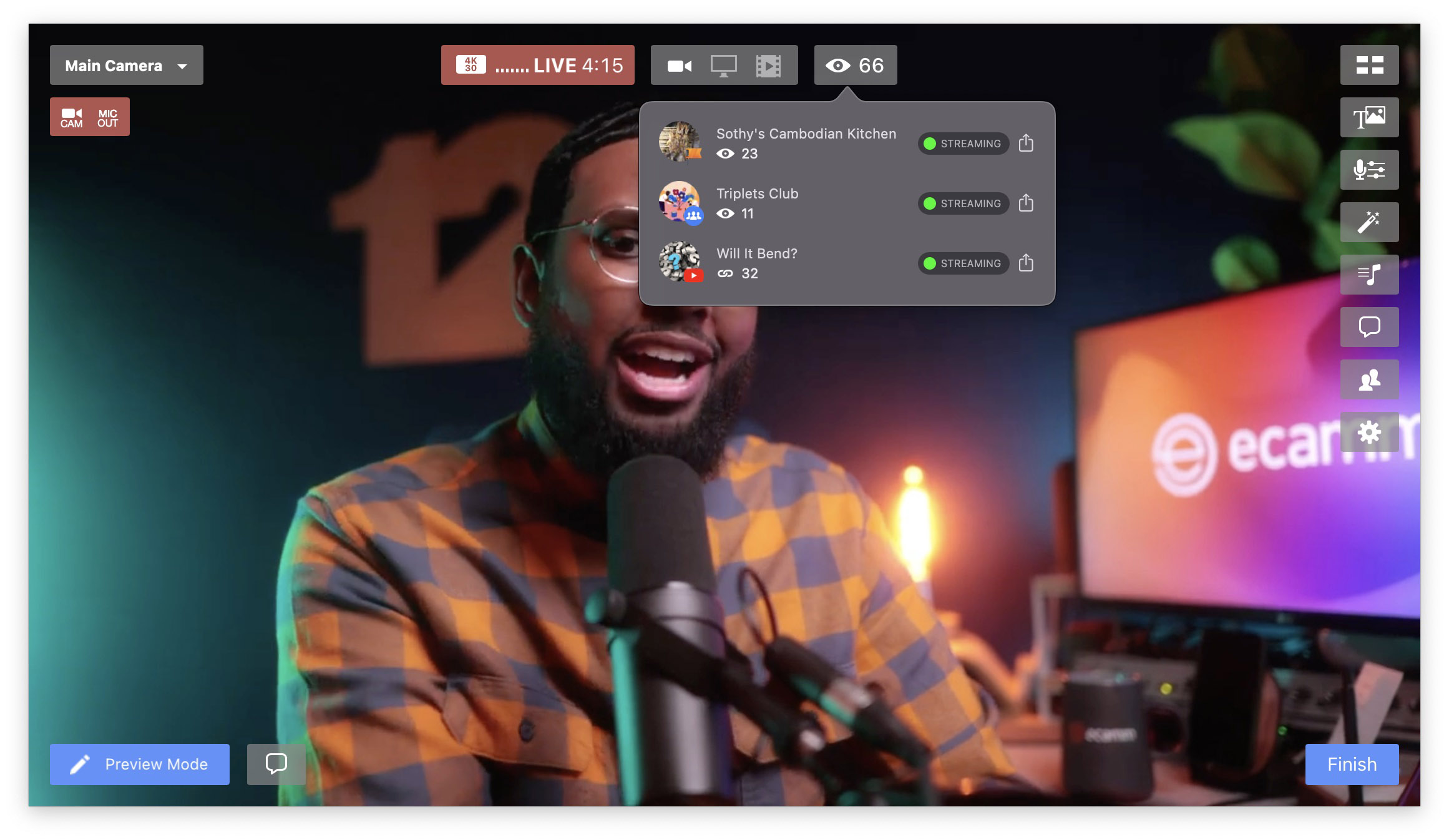 Check on the individual destination viewer counts and statuses by clicking on the viewer count at the top of the Main Window to reveal the status popover.

The buttons in the status popover provide options to view the broadcast in your web browser or copy the broadcast link. During a multistream, there is also an option to end an individual stream.

During broadcasts, any chat comments your viewers post in Facebook, YouTube, Twitch, Amazon Live, or Restream will be displayed in the Comments and Reactions window. Reactions from Facebook and YouTube will also be displayed. If you don’t see this window, pick it from the Windows menu at the top of the screen.

During a broadcast, if there are comments, you’ll see a button in the bottom left-hand corner of the Main Window to reveal the Comments and Reactions window.

When broadcasting to YouTube or Twitch, viewers can be banned by clicking the tiny Ban button below their comment.

When broadcasting to YouTube, Twitch, or a Facebook business Page, you can add comments to the broadcast using the text field at the bottom of the Comments & Reactions window. Type a comment and then press the return key to send it.

Comments are saved to a text file with the file extension .srt. The SRT file is saved alongside your recording file. 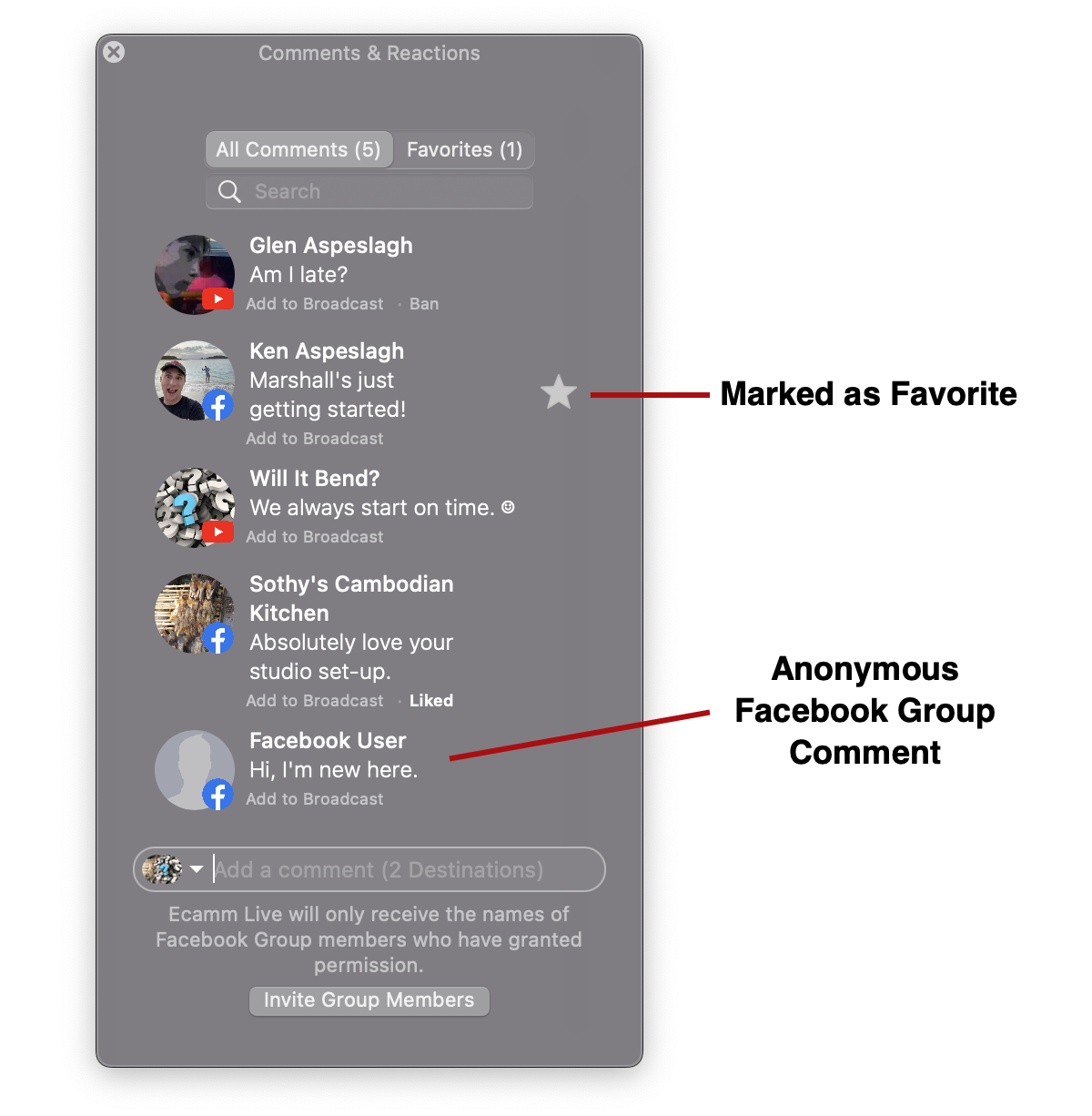 There is also a checkbox for automatically adding this link to your broadcast’s post description on Facebook. 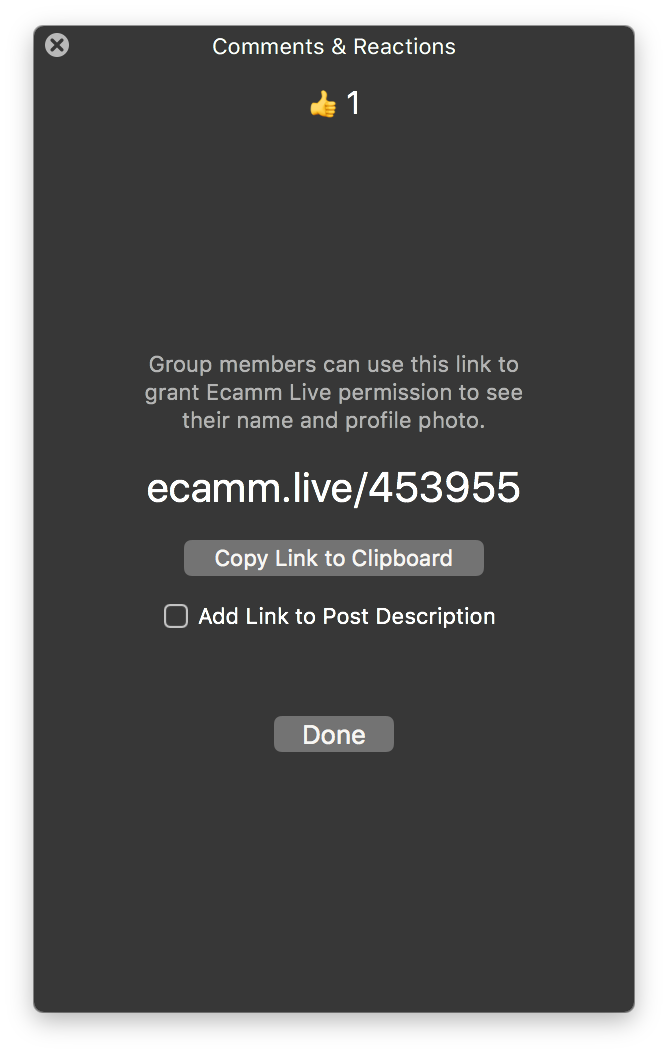 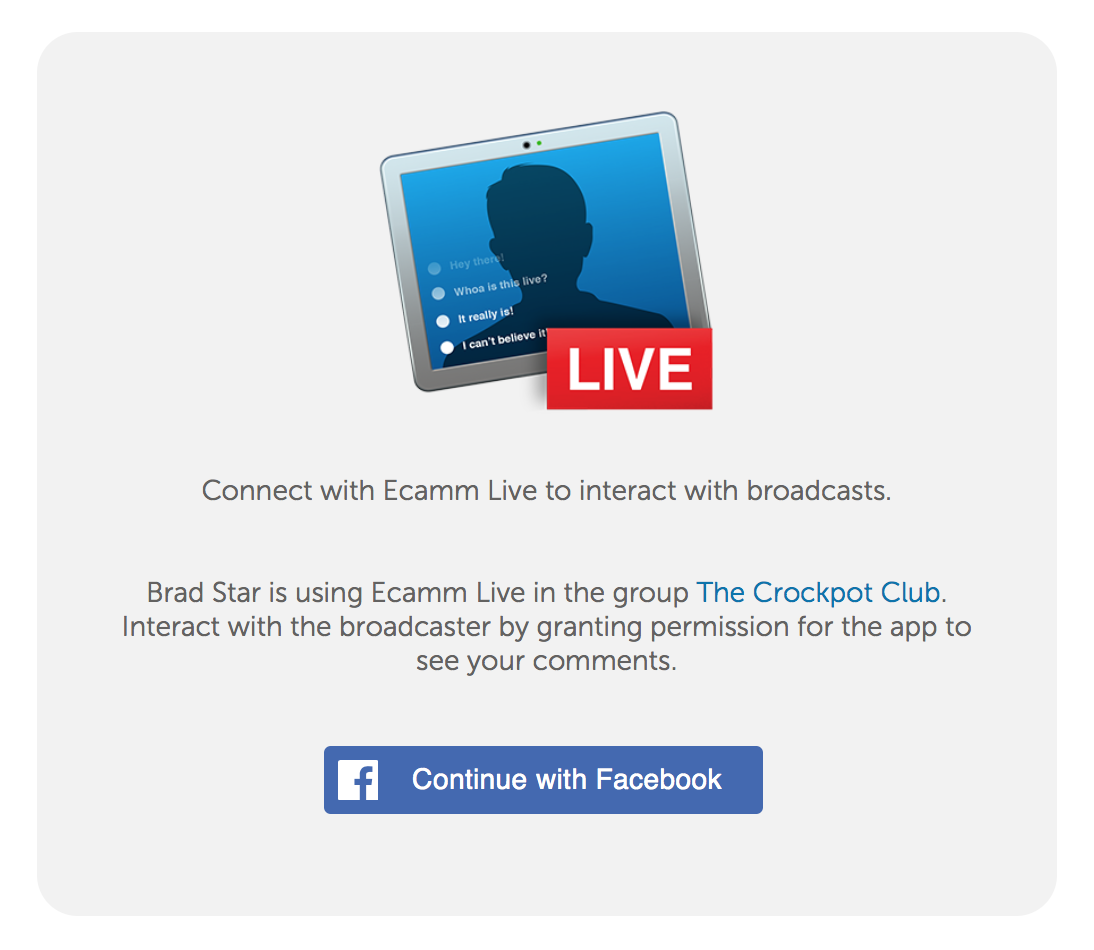 Facebook Group members will only need to do this once, and from that point on, comments in Ecamm Live will show up with their name and profile photo.

The code number provided in the link is unique to you and the Facebook Group, so it can also be used as a link to invite viewer to your broadcast.

Note that the above information about anonymous comments and inviting Group members only applies to Facebook Groups. Broadcasts to YouTube, Amazon Live, Twitch, and public live streams to a Facebook Profile or business Page will display all comments and their associated names and profile photos without any special action by viewers.

Displaying Comments In Your Broadcast

If you would like to share your viewers’ comments with the audience, you can add individual comments to the broadcast by dragging them from the Comments and Reactions window to the Main Window, or clicking Add to Broadcast under any comment. The comment will become a styled Text Overlay. Read more about your options in the Overlays section.

A note about delay in Live broadcasts

Live broadcasts have a delay. This is delay is not generated by Ecamm Live. Everyone who watches (including you viewing your test stream) will be roughly 10 seconds behind you. Keep this in mind when interacting with the audience, as any feedback they provide will be significantly behind you.

At any time during the broadcast, you can add a Marker by picking Add Marker With Info from the Recording menu at the top of the screen. Or, press shiftM. Enter some text for the marker and press return. The marker text and an associated time stamp are added to a text file, which is saved alongside your recording file.

Click Finish or type ⌘E to end the broadcast.

After clicking Finish we’ll present you with a message confirming your broadcast has ended, and offer several options for your next steps. 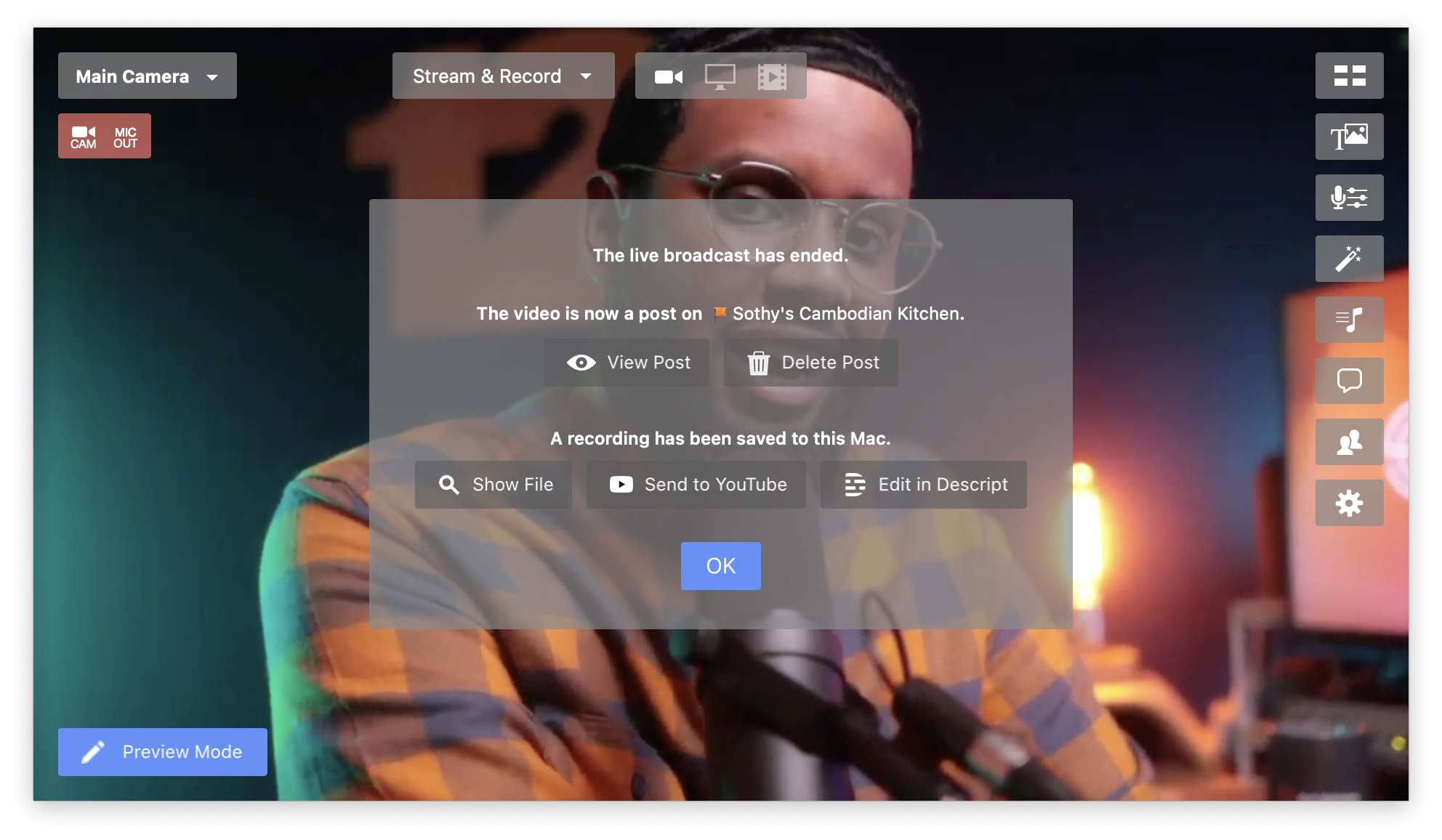 The next three items concern the recording of your broadcast. Much more on Recordings in the Recording section, but for now…

Show File - click to reveal the recording file in the Finder.

Edit in Descript - click to send the recording to Descript.com for editing and transcription.